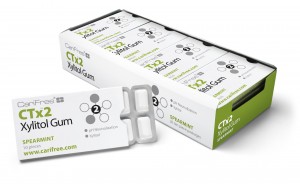 Good news! Dentists here and around the civilized world are encouraging youngsters (and oldsters as well) to chew gum and eat candy every day. But it’s not an open invitation to sugary snacks. Rather, it’s a delicious call to action for ending tooth decay permanently.

Let’s review what causes tooth decay in the first place. In simple terms, a balance of minerals constantly streams in and out of our tooth enamel. Healthy saliva contains calcium and phosphate, minerals that are absorbed by teeth to replenish loss due to exposure to acids in foods and beverages. Good quality, low-acid saliva can use these minerals to repair early, minor damage to tooth enamel – a process called re-mineralization. Who knew that common spit was such a powerhouse of activity?

On the other hand, if saliva contains too little or too much acid minerals leach out of our teeth causing de-mineralization. As calcium and phosphate are dissolved out of the tooth, bacteria begin to thrive in the weakened enamel. This then causes the infection we know as tooth decay.

The good news is that there are currently products available that can significantly enhance the remineralization process. We’re all familiar with fluoride – long the gold standard of treatment for remineralizing teeth – and routinely added to our water supply for over half a century. Recently, products have been introduced that increase the effectiveness of fluoride.

One of the best and easiest of these to incorporate into your daily routine is, startlingly enough, a sugar. Xylitol, a natural sugar alcohol found in tree sap, fruits, and vegetables isn’t exactly new – it was discovered as a sweetener in Scandinavia in the 1940s, rediscovered as a powerful anti-cavity agent in the 1960’s, and certified for safety in the 1990’s. Only recently has it actually become popular in the United States.

Xylitol does not actually remineralize your teeth. Rather, it prevents demineralization by inhibiting growth of streptococcus bacteria and reduces plaque by making it less sticky and easier to remove. Bacteria cannot break down xylitol into acid as they can other sugars such as sucrose, glucose, fructose or dextrose and many artificial sweeteners. Thus, when bacteria fill up on xylitol their acid production slows way down. Xylitol also helps prevent bacteria from adhering to tooth enamel, which, in turn, prevents them from multiplying. And while Xylitol can’t actually remineralize by itself, when used in conjunction with fluoride it enables fluoride to be even more effective at repairing and remineralizing teeth than fluoride alone.

In the correct daily dose xylitol has been proven to lower decay rates.  It can even be used as a safe, healthy, and effective sugar substitute. Xylitol is available in many forms, and is also widely available in health food stores as a bulk sweetener, making it easy to use.

With Xylitol the number of exposures is key; five to 10 servings a day is the optimum dosage. The good news for sugar lovers is that xylitol is available in candies that you suck on, gum that you chew for 5 minutes or more, toothpaste and mouthwash– anything that helps to stimulate saliva, wash out sugar residue, and replace that residue with xylitol.

You can easily replace products you currently use with xylitol products. Swap out your current toothpaste and mouthwash for toothpaste and mouthwash with 100% xylitol and fluoride. With each five-minute dose you’ll be accomplishing oral balance and remineralization. Here is an-easy-to follow schedule that will help you to keep conditions in your mouth optimal and make tooth decay history:

Use xylitol toothpaste, mouthwash or nasal spray upon waking

After breakfast use xylitol gum, mints or candy

After lunch (or snack attacks) use xylitol gum, mints or candy

After dinner use xylitol gum, mints or candy

Use xylitol toothpaste, mouthwash, or nasal spray before bed

At Leland Dental we carry the Carifree line of professional strength remineralization products as well as xylitol in a variety of options such as toothpaste, gels, mouthwash, gums, and mints. With its sweetness, low glycemic index, and multifaceted benefits xylitol will appeal to children and adults alike. Xylitol is also safe for diabetics. Everybody should find something to smile about when it comes to xylitol.

For more information on our new Carifree Protocol, xylitol or other remineralization products, drop in or call us at 781-826-8395